Home » Blog » How I Pick Appropriate Games for My Kid

How I Pick Appropriate Games for My Kid

My kid may be a little on the younger side – a couple of years shy of 10 – but he thinks he’s ready for video games. Is he, though? Let me tell you a little story about how we figured it out together – and share my game-choosing process.

First, allow me to introduce Buddy. My kid can NOT stop talking about Pokémon. The cards, the TV shows…all of it. He even attempted throwing a Pokébaseball at me once to see what’d happen. A welt, that’s what. I’m not ashamed to admit that I’m to blame for all this.

It started with us taking hikes around town, playing Pokémon GO. We would hang out at Pokéstops, and tackle the odd Gym together in the free-to-play game that gets you outdoors. It’s great, but he wanted more. His friends had been telling him about Pokémon Sword (Everyone), Pokémon Shield (Everyone), and countless other games in the Pokémon (Everyone to Everyone 10+) universe . We got to talking.

Step One: Listen to Your Kids

His buddies told my kid about all sorts of games. While you think that Pokémon is all about tossing balls at cutesy creatures — and you’re largely right — some of these games are a little more involved, and possibly out of the range of age-appropriateness for Buddy.

My first stop is always to a video game’s website. I check out the page and read up on the features available.

We quickly zero in on Pokémon Let’s Go Pikachu (Everyone), Pokémon Sword / Pokémon Shield, Pokémon Mystery Dungeon Rescue Team DX (Everyone), and Pokkén Tournament DX (Everyone 10+). Those are the games that he wants to play the most. Now’s when the real work begins.

Step Two: Do Your Homework

That’s a whole LOT of Pokémon to take in – where do you even start?

My first stop is always to a video game’s website. I check out the page and read up on the features available. For instance, it’s nice to know that I can play a game with my kid from another console. We’re just not ready to have a freeform conversation with strangers online. So, if there’s a way to filter out that chat, I do. Then I watch videos to get a taste of the game’s tone and what I can expect for my kid. Next stop: The ESRB. They have a great set of searchable tools that get right to what matters most in a couple clicks. Every hot-button item that could potentially be in a game, from bloodshed and bad language to online play and in-app purchases are all laid out right here.

Of course, reading reviews is always recommended – just make sure you’re getting facts from a source you can trust.

If you’re lucky, there may be a demo of the game available to try out before you buy it. That is always the best way to know what your kid’s getting into before you throw money at the counter.

So, for example, in my little fact-finding excursion, I came across the fact that Pokkén Tournament DX is a fighting game. As in, you’re directly controlling Pokémon and bashing the stuffing out of your opponents. This is a little out-of-bounds, so I downloaded the demo version to double check.

Of course, reading reviews is always recommended – just make sure you’re getting facts from a source you can trust.

The very nature of Pokémon “battling” is that they are throwing fireballs and such at each other, but this iteration was a little too intense for my child. Here, you’re punching, kicking, and delivering moves worthy of the WWE All-Stars. The ESRB rated the game as Everyone 10+ and I got why. Would I let him play it in a couple years? Sure. Just not yet.

My research eventually led me to Pokémon Shield. I consulted the ratings, read the reviews and, most importantly, I learned that this one borrows a lot from Pokémon GO — his other favorite game. The things we loved most, exploring the countryside and going on raids together, carried over from the mobile game we’d play in parks. It was one more big checkbox in favor of playing Pokémon Shield, first.

Step Three: Putting Your Money Where Your Mouth Is

Right now, in the thick of the COVID crisis, it’s hard to argue against downloading digital copies of games. Obviously, with all things Pokémon, we’re talking about Nintendo, but all digital storefronts (including those on Xbox and PlayStation) give you the above-mentioned information and links you need to read. The unspoken bonus for going digital: You never lose the game. Don’t sweat a destroyed disc or lost cartridge again (those Nintendo Switch game cards are stamp-sized!), just protect your passwords – and brace yourself for downloading multiple GB worth of data.

That said, it’s easier to keep tabs on what your kid’s playing if you’re holding all the cards. Or discs. Neither choice is wrong, just think of what works best in your situation.

Step Four: Play The Game With Them

I grew up playing side-by-side on the couch with my pals. So you can bet that I’d be sitting beside my little buddy as we start exploring the Galar region. Honestly, it’s a great excuse to squeeze in some quality bonding time with the kid. Nice 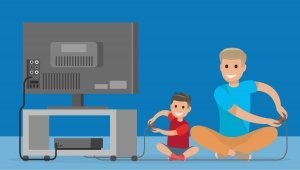 bonus: Pokémon Sword and Pokémon Shield also encourage you to team up with other players. Like his dad, who surreptitiously picked up an extra copy of the game, fired up another Nintendo Switch and joined him on this virtual adventure.

But that’s a whole other story. Darren Gladstone has spent over 25 years working in the games and technology industry. Mostly, though, he’s living a kid’s dream. He gets to share his love of interactive entertainment with people, breaking down the complex for everybody to get. Now, with a young kid, Darren spends his days finding ways to use games to teach valuable life lessons. Like Up, Up, Down, Down, Left, Right, Left, Right, B, A, Start.